This software is still under development! All information and screen graphics can change in the course of development!

Then register HERE in the forum and you can instantly download and install the latest Beta-Version!

Building on the successes as the German world market leader in stand-alone video editing systems for home users, MacroMotion is now introducing its new generation of video editing software for Windows 10 PCs. Many customer requests from over 20 years of experience have been incorporated into Compoesy.

Easy to use video editing, a flexible user interface and not overloaded.

Compoesy can import all common video files from camcorders, smartphones, drones or action cameras in the consumer area (mp4, mov, avi, mts, m2ts, ... *). What Windows 10 can playback without special software, Compoesy will usually be able to cut and edit. The processing of ultra-high-definition formats such as UHD or 4k depends on the respective hardware configuration of the PC system.

Videographers without any editing experience can use the software indefinitely and completely free of charge.

You will be accompanied by the Compoesy assistant from import to export of the finished film. Even material from various sources can be used in the film.

With a sensible selection of transition effects, scenes can be faded or cut hard.

You then simply determine the desired length of the scenes or the duration of the entire film, select suitable music if necessary ... and Compoesy does the rest.

A scene is upside down or the "action" was cut inappropriately by the assistant? Then manual corrections are of course possible to a certain extent.

Seldom has it been easier to create a film from hundreds of holiday scenes or from the last day trip, etc.! (Assistent-Video) 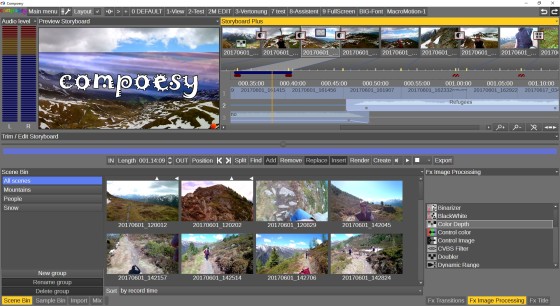 Videographers who want to get "more" out of their film can have additional functions activated for a fee. Then either the work of the assistant can serve as the basis for further fine-tuning - or you can import and cut completely individually right from the start.

The user interface offers plenty of freedom for an individual arrangement of important windows. These window layouts can be saved / loaded as desired and switched at the push of a button. This and a largely freely definable keyboard layout guarantee very simple operation and yet high flexibility in all important work steps .

Video effects, video titles and transition effects can be individually positioned and clearly set. Multiple audio tracks and keyframe-based changes in volume are a matter of course.

A special feature of Compoesy is the clear scene arrangement in storyboard form, combined with a clear timeline and a preview window, which can quickly head to every area of the film with a single mouse movement.

Overview and finishing touches to perfection!

Scenes and sound clips can be sorted into virtual folders so that they are available at a glance when editing, even if the recordings were made on different days or imported from different cameras. Sorted according to the date of recording, scenes from different sources are also in chronological order, which makes it easier to keep an overview.

Mere video editing is not enough? Are special effects needed? Of course you can manipulate video scenes with any effects software and import them into Compoesy for editing. But you can also have it easier: MacroMotion bundles the popular and proven BogartSE software with Compoesy since 2008. Both programs can exchange scenes with each other, which paves the way for a variety of expansions. Bogart can render super-slow motion, particle animations, volumetric light, 3D effects and more - parallel to the user editing with the Compoesy software. 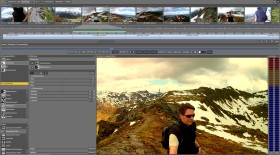 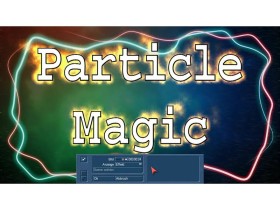 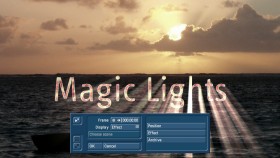 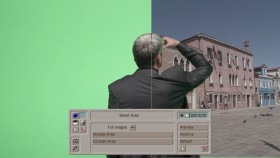 Thanks to multitasking, video scenes can be sorted, trimmed and inserted into the storyboard in Compoesy , while new scenes are imported in the background and Special-FX are rendering in BogartSE. All without blocking the cutting work. A perfect symbiosis!

Depending on the project format, the finished film can then be output directly as hardware-accelerated video export in current formats such as MPEG-2, MPEG-4 / H.264 or HEVC / H.265. Optionally, the creation of video DVD, Blu-ray and even UHD disks with the Arabesk Authoring Software is possible via BogartSE.

MacroMotion Compoesy can be tested as a fully functional demo version. Convince yourself of the quick and easy way to cut videos. A look at a Compoesy video tutorial can be found here.

Register HERE in the forum so you can download and install the latest Compoesy Beta-Version right away!

* Due to different audio / video codec combinations, there is no guarantee for compatibility with the specified file types or extensions. Tests with your own material and hardware are therefore essential.

Don’t have an account yet? Register yourself now and be a part of our community!

Don’t have an account yet? Register yourself now and be a part of our community!

This site uses cookies. By continuing to browse this site, you are agreeing to our use of cookies. More Details Close